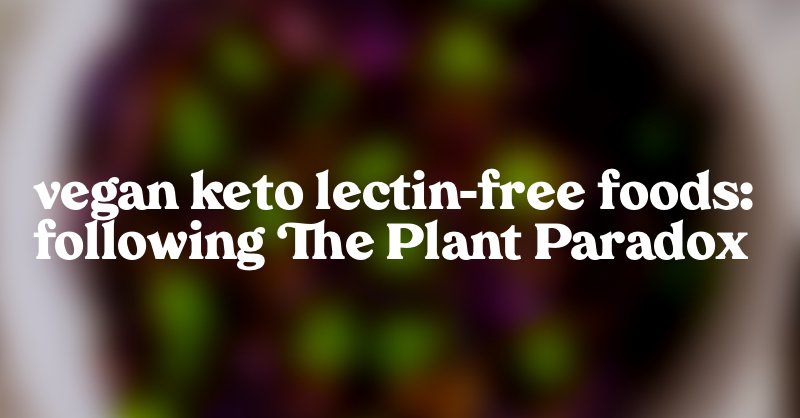 Recently, I had a few different people reach out to me about The Plant Paradox book, saying that they were going to give the program a try and wanting to know how they could modify their current vegan ketogenic diets to comply with Dr. Gundry’s program. So, here we are.

Quick note: for those of you who just want the list of foods, you can scroll on down to the bottom, but if you want to know a little bit more about this program, keep on reading! 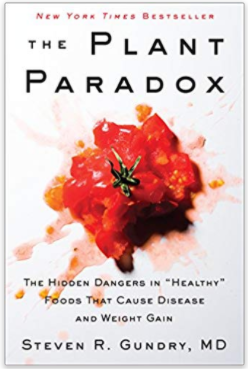 I read Dr. Gundry’s book over the last few days and found it to be quite enjoyable, though, he is a little over-enthusiastic with his direct assertions of what your results will be and the citations don’t always seem to add up. In short, this eating program is a modified Autoimmune Protocol (most often shortened to AIP), where instead of just blanket-eliminating foods, he targets those most likely to cause a reaction. He also provides tips for preparing foods (mostly beans and pseudo-grains) so that you could continue eating them after following his two-week regimen.

Dr. Gundry posits that plants have defense mechanisms that work to protect them and their seeds. These defense mechanisms come in the form of lectins, proteins of which gluten is the most famous, and that while humans are well-adapted to the compounds from certain plants, we are not so adapted to the compounds of others. Like I mentioned before, gluten is arguably the most famous lectin, but problematic lectins can also be found in grains and pseudograins (like quinoa), nuts, seeds, legumes, nightshades, some animal products, and some fruits. It’s also important to note that ALL foods contain lectins in some for or another, so going “lectin-free” is pretty much impossible, but “lectin-free” is what people are asking me about, so that’s why we’re using that vernacular in some places.

As you can probably guess, Dr. Gundry’s solution here is to eliminate these troublesome lectin-containing foods from your diet to help heal your gut, which the autoimmune aims, to do as well. These plans do diverge pretty early on, though. AIP diets eliminate food groups categorically, leaving the eater with a small selection of vegetables and meats to choose from. As beans, nuts and seeds are all eliminated, this diet is incredibly difficult for vegans and vegetarians to follow and really should only be used for a very short period of time for those two groups of people, if at all.

I like Dr. Gundry’s approach better here, because instead of blanket elimination, he advocates for elimination of the most problematic foods, while still allowing for the consumption of some nuts and seeds that can help to provide vegans and vegetarians with some much-needed protein. Of course, there is protein in pretty much all plant food, but it’s certainly a lot easier to obtain an adequate amount if some nuts and seeds are permitted, my beloved hemp in particular.

All of that, combined with the constraints of a vegan ketogenic diet, is the reason the following list of foods will seem so restrictive. If you are curious about Dr. Gundry’s approach, or if you want to try the diet, I strongly urge you to read his book. I also recommend reading his book if you are considering trying the AIP as a vegan or vegetarian, as I think Dr. Gundry offers a much more accessible option for us veggies. 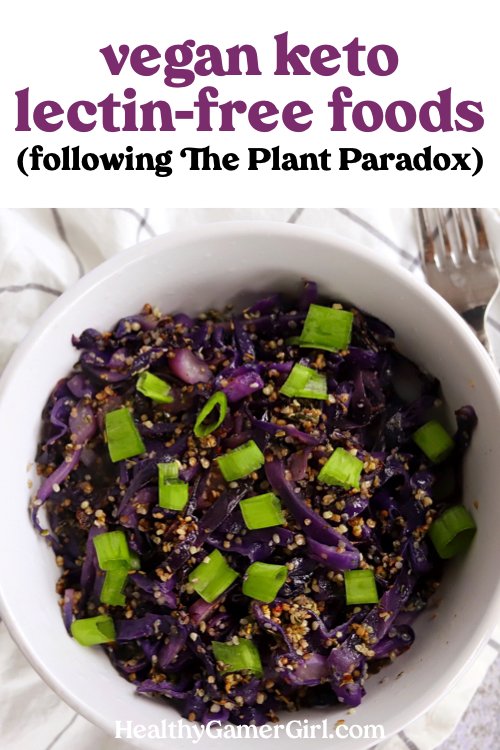 OTHER PANTRY AND FRIDGE ITEMS

What Can’t I Eat?

I’m not going to go into huge detail here, because I want to focus on foods you CAN eat, as opposed to those you “can’t,” but here is a brief list of foods to avoid if you are trying to follow The Plant Paradox while also on a vegan, keto diet…

Neither of these lists is exhaustive, and there are actually some foods not mentioned here that I’m curious about myself, so I’ll be updating this list as I go along!

I’ve also decided to try the plan out for myself over the next few weeks, so to see how that goes, check out my instagram!

How I Eat in a Day While Working Out on Vegan Keto
Reiki for Endometriosis: Have I lost my mind?