5 Tips for Playing Pokemon Go in a Rural Area 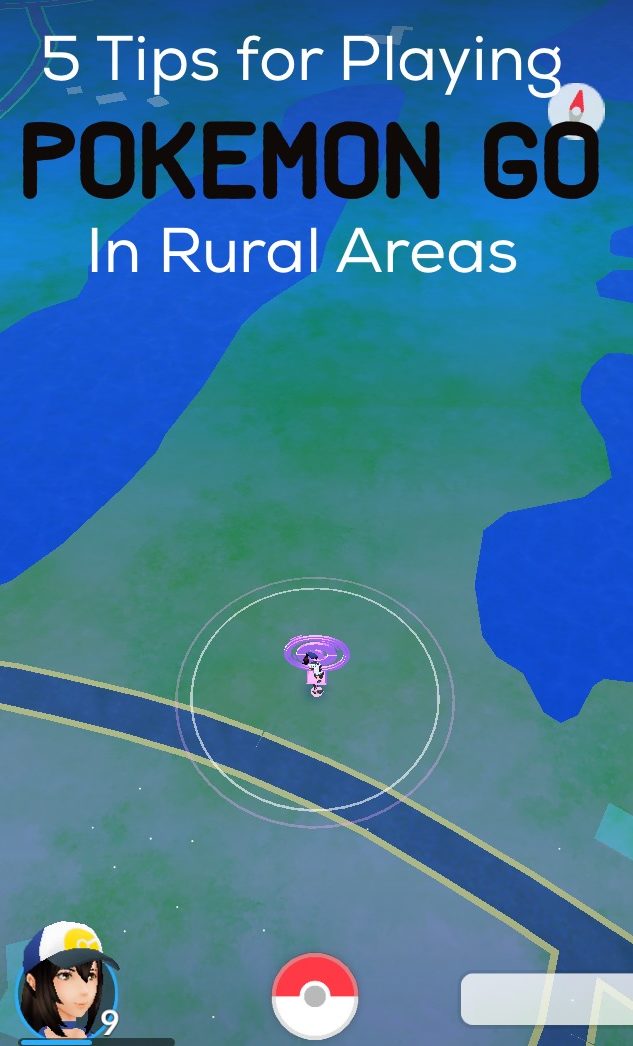 Are you playing Pokemon Go in a rural area? Me too! I didn’t realize the experience was so different until I started reading more articles, and seeing more posts. Yes, it’s difficult, but you can actually still get a lot out of Pokemon Go, even in rural areas.

Like everyone else in the world, I downloaded Pokemon Go last week, and it has taken over my life. But, after a few days of wandering around the areas surrounding my house and only catching around 5 pokemon a day, I started to feel a little bit frustrated. I mean…where the heck are all the pokemon? Everyone on Reddit and twitter and instagram (plus, my friends in the city) were posting and texting their exotic catches, and here I am, staring at a handful of Pidgeys and Rattatas. This was the first lesson in the simple fact that playing Pokemon Go in a rural area is hard, but you can still get a lot of enjoyment out of this!

Find Your Poke Stop, and Camp It

Almost every rural area, or farm town has a Poke Stop, or at least there will be one within driving distance. For me, this is near some ponds and woods where, fortunately, there are also hiking trails. In order to maximize the effort it takes to get out there, I basically walk a little five minute loop around the Poke Stops, with eggs in incubators, and keep returning to grab some more poke balls and other goodies.

This hatches those eggs, and allows me to keep returning to the stop to grab more supplies. Occasionally, a pokemon will pop up during this, too. Win, win, win.

Catching pokemon will net you a decent amount of XP, but what’s even better? Evolving them. Save up your trash pokemon (your Weedles, Pidgeys, Rattatas and whatever may spawn near you), then pop on that XP buff egg and evolve loads of them. Voila – you’ve gained a level from turning Weedles into Kakunas!

Walk, a Lot (And Incubate)

You’re going to need to rely on hatching eggs for a good amount of your Pokemon catching. This is nice because you actually get exercise from it as well (obviously, heh).

If you’re willing to spare a few bucks, incubators are your best purchase. Hatching multiple eggs in a go is preferable to just the one. You’ll also get incubators from leveling up, so don’t feel like you HAVE to spend!

So, there are virtually zero Pokemon around me at any given time, but I do manage to catch 5-6 with every use of incense, even just sitting in my house. Using the incense at your house is a good way to make sure you don’t lose a signal halfway through, and bug out the game, thus wasting resources. Yes, the server may still crash, but you won’t experience those pesky moments where the poke ball glitches out and you lose Pikachu (nvr 4get).

So, a theory has been floating the interwebs suggesting that incense used in rural (not city) areas may yield rarer Pokemon spawns than incense used in a city. I’ve only used incense in a rural area, and actually had noticed that I was catching some pretty interesting little guys in and around my house (there are no nests near my property, so these weren’t normal spawns).

But, of course, having no city incense usage to test against, I just thought that all incense spawns were better. I figured it was like buying a booster pack in any TCG – you’re guaranteed that foil! Anywho…. one brave redditor tested out this theory, and seemed to have luck with not only rarer Pokemon, but also with catching evolutions!

This article also pretty clearly states how to go about maximizing incense use in rural areas (with video)! Basically, now all of us who play Pokemon Go in a rural area can be marginally less bitter!

I don’t have a gym anywhere near me, and you might not either. Don’t sweat it – focus on the slow grind upwards, and once you DO find a gym of your team’s color, sit there for as long as you can. Never let go. Most gyms are near Poke Stops, so doing some battles, walking to the Poke Stop, then back for more battles (on loop) is another nice trick to grind out some XP.

See? Pokemon GO in a Rural Area Isn’t the Worst…

I mean, it kind of is, but at least there are ways around it! No, you won’t level as fast as your city friends, or find a lure somewhere, or dominate the gym, or catch a variety of neat Pokemon, but you’ll also likely not get bored as fast, or be tempted to spend as much money, or run out of things to do.

Episode 24: Why losing water weight is a good thing
5 Pokemon Go Life Hacks (that make the world a better place)