How to Make Coconut Milk and Coconut Cream From Dried Coconut 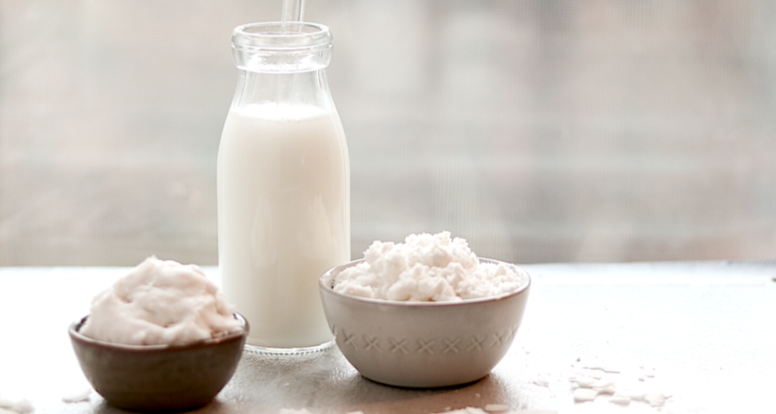 Over the past decade, I’ve been slowly trying to make more and more of my food from scratch to eliminate unnecessary packaging and ingredients from my diet. Plus, most of the time, making things from scratch can save you some cash over the store-bought versions. Lately, I realized I was buying a lot of canned coconut milk to make coconut cream with and also a lot of coconut milk in the cartons to put in my tea and coffee. So, I thought I’d start making homemade coconut cream and coconut milk to cut down on the cost, the additives and the packaging.

I’ve made coconut milk in the past by taking dried coconut flakes/shreds (also called dessicated coconut) and blending it with water, so I thought I’d expand on that idea and work out the ratios to try and make both coconut milk and coconut cream.

Because there are so many different coconut products out there with similar names (sometimes even the same name!!), I thought I’d quickly define what exactly what I mean when I say “coconut milk” and “coconut cream.”

Making your own coconut milk and coconut cream at home doesn’t require a lot, in fact you just need two things!

So, like with making homemade hemp tofu, a blender is also necessary for making coconut milk and coconut cream from dried coconut flakes. I bought a Vitamix 5200 years ago, and it’s still going strong and I use it multiple times per day. Do you need a Vitamix? Of course not, but I figured it’s worth mentioning. I think high speed blenders are worth the investment, if you want to be able to make nut butters, nondairy milks, soups and frozen treats, but for this project, you can totally just use a regular blender. It may not be quite as effective, but it still works!

No, really, that’s what it’s called. Nut milk bags are typically just a mesh bag used to make homemade almond milk (or whatever kind of nondairy milk you want) and can even be used to make homemade tofu. They’re easy to clean and come in handy for squeezing the excess liquid out of zucchini and cauliflower when using them in recipes.

Really, the only thing you need is dried coconut. I buy mine in bulk from my local health food store, but you can also find it online at many different retailers. There are a few optional ingredients, though, so I’ll mention those briefly as well:

Why the sea salt? Adding in a tiny pinch of sea salt can bring a little more depth to other flavors. This is especially nice if you are also adding in vanilla.

The vanilla and stevia serve more obvious purposes – I really like vanilla flavored coconut milk. Of course, if you are on following a strict Autoimmune Protocol (AIP), you likely won’t want to add either of these.

How to Make Homemade Coconut Milk and Coconut Cream

Because the processes are interrelated, both recipes will be written here as one long-form recipe.

Why Is My Coconut Cream Hard?

When you make coconut cream from a can of store-bought coconut milk, it tends to be somewhat thick and creamy and scoopable. You might notice that the homemade version is a little different. This is because store-bought brands often use thickeners and stabilizers like guar gum, xanthan gum or locust bean gum to help emulsify the coconut milk and give a thicker texture.

You can do this same thing at home! I typically don’t like using gums like the ones mentioned above, as they are hard on digestion and serve no other nutritional purpose, but I do like using glucomannan starch/powder, which is the fiber found in konjac noodles.

This fiber has been shown in studies to reduce appetite and promote a feeling of fullness without the digestive upset that gums seem to have.

Typically, I like to add 1/8 – 1/4 tsp to each batch of coconut cream, fork-whisking it in completely before adding in more. You may also want to add a little liquid, depending on the texture you are trying to achieve. It may take a few attempts to get the coconut cream to a consistency you like, but I find that it’s worth the effort to achieve a similar texture to the store bought variety for things like whipped coconut cream or coconut frosting.

Hi, I'm Liz, a Certified Nutrition Consultant and avid food-lover. I make gluten-free vegan recipes that are often sugar-free and allergen-free as well. I also create plant-based AIP (autoimmune protocol) recipes for people like me, who are managing their autoimmune condition symptoms through diet and lifestyle.